ECT plus Antidepressants: a Review

Out on PubMed, from researchers in Rotterdam, The Netherlands, is this review:

Influence of an adjuvant antidepressant on the efficacy of electroconvulsive therapy: A systematic review and meta-analysis.

Our results suggest that an adjuvant antidepressant enhances the efficacy of ECT in patients with major depression. Although the included studies had some methodological limitations, effect sizes were consistently small to moderate. We speculate that modern-day controlled trials using adequately dosed TCAs and MAOIs will most likely result in larger effect sizes. From a clinical point of view, we prefer an adjuvant TCA to an adjuvant MAOI, since TCAs are generally safe to use with ECT (American Psychiatric Association, 2001; Baghai et al., 2006; Naguib and Koorn, 2002; Sackeim et al., 2009), whereas MAOIs warrant precautions during anaesthesia for ECT (Dolenc et al., 2004; Naguib and Koorn, 2002). Moreover, MAOIs are prescribed far less commonly than TCAs and the use of an MAOI requires dietary restrictions.

Thus, if ECT is indicated for a patient with major depression, we recommend the routine use of an adequately dosed adjuvant antidepressant to improve the efficacy of ECT. We leave the choice between a TCA, an SSRI/SNRI and an MAOI up to the clinician. Our findings warrant renewed interest in adjuvant pharmacotherapy during ECT for major depression.

This is a carefully crafted and very useful systematic review and meta-analysis of an important topic. The authors are clear in their belief that, despite the limitations of the literature, concomitant antidepressant (AD) use with ECT is helpful.

Although not mentioned, because there was no placebo group in the acute phase, the PRIDE study added to the evidence base of the safety/tolerability of combined venlafaxine and ECT.
The reluctance of the current generation of psychiatrists to prescribe TCAs and MAOIs, while unfortunate, is likely to continue, despite these findings; it is therefore anticipated that SSRIs/SNRIs will be the class of AD most commonly prescribed with ECT.
concomitant antidepressant ECT MAOI SSRI/SNRI systematic review and meta-analysis TCA

Popular posts from this blog

Use of ECT for Depression in England

July 05, 2020
Out on PubMed recently from researchers in England is this audit report: Prescribing for moderate or severe unipolar depression in patients under the long-term care of UK adult mental health services. Paton C,   Anderson IM , Cowen PJ, Delgado O, Barnes TRE. Ther Adv Psychopharmacol. 2020 Jun 15;10:2045125320930492. doi: 10.1177/2045125320930492. eCollection 2020. PMID:  3259593 The abstract is at the above link, and copied here: Background:  A quality improvement programme addressing prescribing practice for depression was initiated by the Prescribing Observatory for Mental Health. Methods:  A baseline clinical audit against evidence-based practice standards was conducted in UK adult mental health services. Results:  A total of 55 mental health services submitted data for 2082 patients, under the care of a community psychiatric team (CMHT) for at least a year, with a diagnosis of moderate or severe unipolar depression, 54% of whom had a comorbid psychiatric diagnosis. Select
Read more 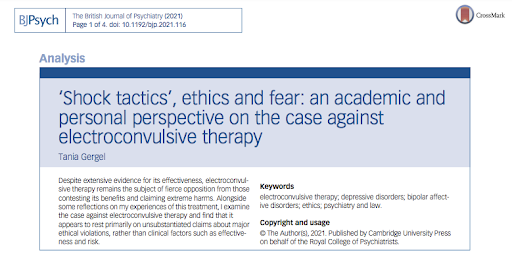 In the British Journal of Psychiatry is this commentary: The pdf is here . And an excerpt from from the text: The first question must surely be motivation. Around 1.4 million people worldwide receive ECT annually.1 In psychiatric terms, ECT is relatively costly and complex, involving general anaesthesia in most countries, with estimates of annual treatment costs that ‘can exceed $10 000’. 14 If, after 80 years of ECT, there really was no evidence for effectiveness, why would healthcare providers continue funding ECT and what would psychiatrists stand to gain, especially in the face of such acrimonious criticism?  Moreover, claiming that psychiatry knowingly inflicts an invasive medical treatment with potentially serious side-effects and no evidence of substantive therapeutic benefits implies a global breach of core medical ethical principles. Not only would this violate both beneficence and nonmaleficence, but also justice, through allocating limited resources to expensive and ineffect
Read more 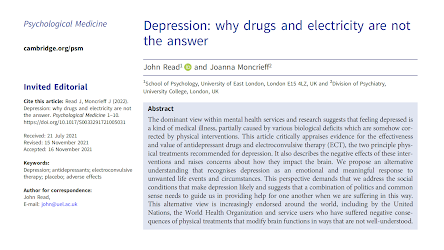 Out on PubMed, in Psychological Medicine , is this article: Depression: why drugs and electricity are not the answer. Read J, Moncrieff J. Psychol Med. 2022 Feb 1:1-10. doi: 10.1017/S0033291721005031. Online ahead of print. PMID:  35100527 The abstract is copied below: The dominant view within mental health services and research suggests that feeling depressed is a kind of medical illness, partially caused by various biological deficits which are somehow corrected by physical interventions. This article critically appraises evidence for the effectiveness and value of antidepressant drugs and electroconvulsive therapy (ECT), the two principle physical treatments recommended for depression. It also describes the negative effects of these interventions and raises concerns about how they impact the brain. We propose an alternative understanding that recognises depression as an emotional and meaningful response to unwanted life events and circumstances. This perspective demands that we add
Read more